With many Texas cities being built out, and with less vacant land available, rezonings are more common. Often, existing zoning for commercial is being rezoned to apartments or modified for the urban-style, mixed-use, higher density developments.

Say you did your job before buying your house, condo, or business and made sure you thought your land use was compatible with the existing zoning of vacant land or derelict land in your immediate area. You buy your land knowing that that vacant property is zoned commercial, for example. Time goes by and a zoning sign pops up on the land to rezone the commercial to multifamily or industrial uses. The case will go before the planning and zoning board before it goes to city council for final approval. You need to know what to do in these situations.

Rezoning petitions appear to be purposely confusing. Often, cities will not bother interpreting the state rules, they will just post the state legalese. Petitioners find out if they interpreted the game rules correctly or not AFTER they turn in their petitions. Each city can also impose its own deadlines for petitions. Some city deadlines for completed petitions even come a day after the planning and zoning meeting depending on the date of the next city council meeting. Clearly, this is meant to be an uphill battle for petitioners. Please look on your city's website or ask the planning department for specific forms and requirements.

With the rezoning petition, if 20% or more landowners in the 200” buffer around the property to be rezoned sign a petition, a “supermajority requirement” is triggered for the city council vote when it comes to them instead of the simple majority vote.

This supermajority trigger does not ensure city council will not have enough votes to pass the rezoning. However, each councilman knows they will be sticking their necks out more obviously if they vote yes. They cannot hide behind a simple majority vote.

Austin city’s website spells the requirements out a bit more clearly than any other city around:

Citizens would need GIS (geographic information system) software to calculate percentages of the area of each property within the rezoning buffer. Cities have to supply it when asked because no one else has access to GIS.

I’ll use a real example from a recent rezoning case in the city of McKinney, TX that is still ongoing.
This map from P&Z shows the dotted, blue 200" buffer around the property that wants to be rezoned. This map is included in the agenda that comes out about 72 hours before a P&Z meeting: 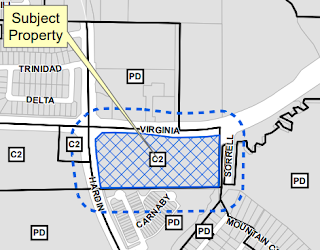 According to the state statute/law, citizens must get signatures of 20% of the area of property owners in that buffer zone minus the streets and alleys the city owns. No one other than the city would know that information.

This is why citizens must immediately ask planning for a map of owner percentages within the buffer, including a list of the owners with total percentages calculated. They have to do this anyway to calculate the petition percentages. If they tell you to fill out an open records request, go above them. Time is of the essence in these cases and open records requests take at least 10 days.

Here is what I got when I asked for the detailed map and list of property owners and their percentages of the buffer zone.


Now you can see why the planning map and property percentages are so important. From the map and enclosed property list, you can figure out pretty quickly how much of a chance you and the other landowners have to get 20% of the area in the buffer. Some properties are nearly impossible to get the 20% required due to land placement, elevation, surrounding property owners, etc.

In this case, the HOA also owns quite a bit of the area. The existing businesses across the streets do not count for as much as the homeowners or HOA. The home owners are in a good position if they stick together. If the homeowners decide to go along with the developer, sticking together and speaking together will get any promises made entered into the new zoning requirements if planning is aware--it's an additional safeguard for the community.