Citizens Should Track Streams of Influence in City Politics, Part 2

To recap from part 1, Tupps opened its doors in 2015. A local PAC in McKinney called McKinney Team also started in 2015. Three members of the McKinney Team PAC are also on the board of Tupps. Tupps has gotten over $15 million in city dollars through the MEDC, MCDC, and the TIRZ#1 fund since 2015.

"McKinneyTEAM was formed by a group of business and civic leaders who acknowledge the previous success of our city, but have a vision to raise the bar for the future. As a coalition of seasoned executives we will attempt to establish an honest forum for issues to be discussed and strong leadership to advocate for our community’s future. McKinneyTEAM is a nonpartisan, nonprofit political action committee organized and operating under section 527 of the Internal Revenue Code, reporting to the Texas Ethics Commission as a General Committee.”

The McKinney Team is really the only local PAC in McKinney that provides campaign-changing monetary support, organization help, and the goods necessary to have a hefty advantage over any opponents. PAC filings for McKinney Team can be found here.

When the McKinney Team first started, it was not successful with its initial candidate picks for local office in the 2015-2016 period. It has been successful, however, with its support of nearly all city and MISD bond elections.

Starting in 2017, the McKinney Team helped elect 3 out of their 4 picks: George Fuller for Mayor (won), Charlie Philips for At-Large (won), Dusttin Pearson for District 1 (lost), and Scott Elliot for District 3 (won).

Here are the candidates the McKinney Team is supporting this year: George Fuller for Mayor, Charlie Philips for At-Large, Gere Feltus for District 3, and Jason Beller for District 1. Beller is also an employee of Independent Bank. 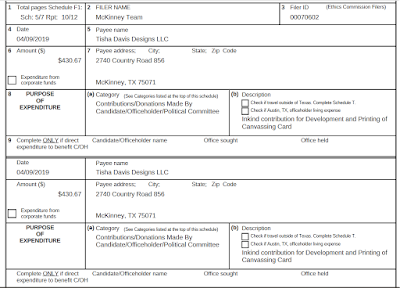