Because of the downtown garage bond failure in 2015, the city cannot take out loans or bond for a garage for 3 years. When a developer offered to carry the loan, build the garage, and take a profit from it, the City jumped at the offer. Last April, City Council voted to approve Option C for the garage because it wouldn’t require the closing of Herndon. The old City Council thought it would negatively impact Thomason Tire which uses Herndon as part of its business too much.

Since a majority of downtown’s sales tax and property tax earnings are put into the TIRZ #1 instead of going into the general fund, the monetary success of downtown is largely kept downtown. Every year, no matter how successful downtown is, the rest of the city only get the base amounts from 2010 which were not very high: property tax of about $1,223,602 and sales tax of about $1,396,598.

All the property and sales tax made over those base amounts is put into the TIRZ #1 to be used on TIRZ #1 improvement projects alone, like a parking garage. The TIRZ #1 will last until 2040, unless it is reauthorized for longer. See below for the TIRZ #1 balances.

The new plan of Option Herndon Closing would cost $1.23M more for about 100 extra parking spots for a total of $8.73M. Where is the additional funding coming from?

If the additional costs come out of our general fund balances—which was suggested at the 9/5 City Council meeting—TIRZ #1 might still only pay $3M, while the general fund would pay the balance of $5.73M.

Why doesn’t the City or City Council want to use more of the TIRZ #1 money for a parking garage that will clearly help the TIRZ #1 area revitalize? They want to keep a lot of the funding for the Highway 5 project. However, those plans continue to be on hold because TxDOT might extend SH 121 in a way that would impact Highway 5.
The Highway 5 revitalization plans are in the Town Center Study and TxDOT’s State Highway 5 Corridor Master Plan of 2014.


If you look at the picture below, this is the Town Center Illustrative Vision for downtown from 2014. Note that Herndon is not closed in this vision. However, there’s no Thomason Tire or any of the old businesses on Highway 5. There are just a lot of brown “Lofts/Office Over Retail.” The highlighted street is Herndon. Thomason Tire and the location of the garage are circled in light blue. 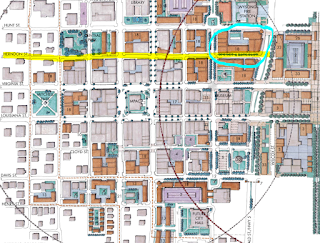 Posted by Bridgette at 8:47 AM