Misuse of Eminent Domain in McKinney?

It looks like the city of McKinney initiated eminent domain proceedings against a private property owner so a brewery moving to the area could have a parking lot. Yes, the land to be eminent domained is a trailer park that might make the redevelopment of the east side look "incomplete." However, the eminent domain resolution doesn't use blight or redevelopment as reasons for the city's action.

The resolution claims that the property is subject to eminent domain action to make room for an "East Louisiana Public Parking Lot." This is another example of the city missing the opportunity to look more above board while also risking more city money loss in potential lawsuits (remember the $10 M+ settlement the city had to pay out to JND because the city used eminent domain wrongly to favor one developer over another during the failed gateway debacle?). This looks like another messy rush job. Sure, the property owner will probably sell to the city and we can avoid further court action. But, the landowner would only be selling because of the threat of eminent domain action. Threatening property owners is not a good look for McKinney.

The site plans for the new brewery complex do not include a parking lot. The brewery will be relocated as part of a $11.3 M grant from the McKinney Community Development Corporation (MCDC) that would allow for the renovation of McKinney's historic grain site. The agreement between Tupps and the MCDC includes a long-term lease of the space with an option to own. It also includes a 2% revenue share with the city. The city of McKinney will have to sell the grainery site to the MCDC. See more details in the article here. Please continue reading for the documentation below.

Back on September 1st, 2020, the city council passed this resolution:

WHEREAS, the City Council of the City of McKinney, Texas, has determined that a public need and necessity exists for the East Louisiana Public Parking Project (“Project”), generally located to the East of Highway 5 between East Louisiana Street and Anthony Street. The properties associated with the Project are generally set forth on the map attached hereto as Exhibit A; and

WHEREAS, the City Council has considered this Project and has determined that a public necessity exists for the acquisition of the properties (in fee simple), as described on Exhibit B, attached hereto and incorporated herein for all purposes (“Property”).

See above for the picture of the property (trailer park) subject to the eminent domain action with Tupps added for clarity.

Here's the site plan submitted to the MCDC on June 25th, 2020 with the trailer park/parking lot added. 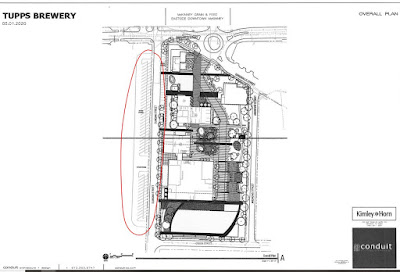 :
No one is saying the TUPPS deal is not a good idea. But, a city pulling out the eminent domain card (when this is clearly a brewery parking lot pretty far away from the future new city hall) because it does not want to take the time to use other methods (health code violations for the trailer park and taking the time to work with the property owner) is wrong. Or, TUPPS could have simply scaled down their mega complex to add parking spots.

Here is the Texas Government code on proper uses of eminent domain:

Posted by Bridgette at 9:28 AM