In addition to the concrete budgeting issues at added another $7.1M to the stadium costs, MISD forgot that it had to include turn lanes in their $70M + stadium budget. MISD freely admitted it at the regular Board of Trustees meeting on August 22nd meeting. They are going to reallocate bond funding to cover it.

A bigger issue is the sewer lift station. The area where the stadium is being built had no sewer lines, which was why no one ever developed the area--too expensive. Did they do due diligence before they bought the land? Why did MISD decide to build the stadium there anyway?

According to the city of McKinney, a sewer lift station has been a requirement for that area since 2004. I was able to find the information on McKinney's website that was dated 2013. Mr. Quint (city development department) said that within 5 years the city was going to build the lift station itself at its own cost. However, since MISD bought the land and wanted to build earlier, the cost would be shared. Now, the stadium cannot be opened until the sewer system is built and some on the MISD Board of Trustees appeared to blame the city for the delay required to complete the lift station.

If MISD staff forgot to add turn lanes to the budget, might it be possible MISD staff also forgot they had to help pay to build a sewer lift station instead of doing what it looks like they did (make up a workaround without asking the city)? Funds will be reallocated from the technology and furniture and fixtures portions of the $220 M bond approved in 2016. 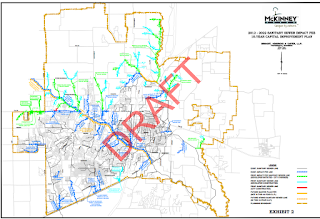 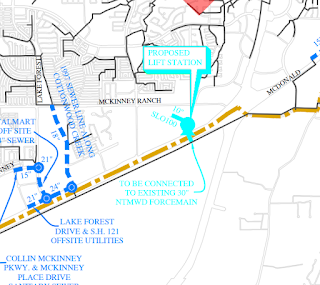 Posted by Bridgette at 8:42 PM