Redrawing our city district boundaries goes hand-in-hand with the 2020 census. The process will begin in the next few months.

According to Mr. Grimes, the city has hired an outside firm, Bickerstaff-Heath, to work with Mr. Houser (City Attorney) and Ms. Drane (City Secretary). They will be presenting a timetable to city council eventually. Mr. Grimes also said there would be a citizen committee and citizen oversight throughout the process.


McKinney has four districts with a city council representative for each. There are also two at large council positions and the city mayor position that are responsible for representing all residents.

Here is the map of districts and the demographics of each district in 2010 vs 2020. 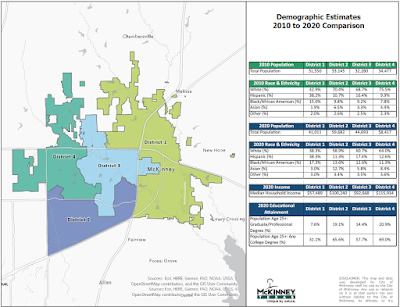