Limited Citizen Options in McKinney Can Be Fixed

The second arrest in six months of one of McKinney’s City Council members, this time on felony domestic violence charges, has led many citizens to ask if they have any options. Unfortunately, there is not much citizens can do other than send emails of displeasure and hope conditions change.

Citizens of McKinney are fairly boxed in with a newly restrictive citizen comment policy and an impossible recall ordinance that hasn’t been revised since the 1950s.

In October of this year, restrictions initiated by Councilman Shemwell (which were approved of by the Mayor and the rest of City Council during a work session) ended a ten year policy that allowed all citizen comments before and after meetings. Now, comments at the start of meetings are restricted to agenda items only. Any comments about the state of the city, City Council member arrests, policies, needed changes in ordinances, and more are only allowed at the end of meetings, per this new written policy.

Mayor Fuller has said publicly that there will be times he will allow non-agenda citizen comments at the beginning of meetings. He indicated he would decide on the fly—which makes it very difficult for citizens to know when his unofficial policy replaces the official policy. The restrictions in the new policy should be repealed. Please see this and this for background.

The only other option for citizens is a recall petition. McKinney has the must difficult recall hurdles in the area. 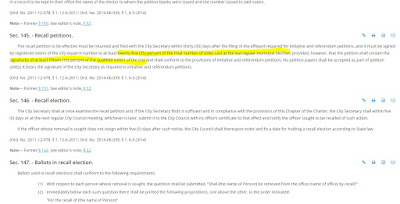 However, McKinney’s second hurdle is the requirement that the minimum amount of signatures must be 15% of the total qualified voters in McKinney. This additional burden means that if we have 100,000 eligible registered voters, the recall petition must collect signatures of 15,000. That requirement is well over the amount total voters in the last municipal election.

Even though other cities around McKinney only require signatures of 30% of the amount who voted in the last municipal election, recalls are still a rarity. The bar is sufficiently high enough to limit recalls.

McKinney residents can change the restrictive ordinance with an initiative that could be placed on the ballot in May, 2019.

With limited options, it only makes sense for citizens to look at making recalls a more accessible tool. A recall only calls for a new election, a revote on whomever is recalled. It should be hard—but not impossible—to recall an elected local official.

If we have no power to recall, we have no option but to hope and pray we haven't made a mistake we will paying for until their term is up. And, where is the accountability if our elected officials know there is nothing we can do to stop them from breaking their campaign promises once in office?

Here’s the official wording in our city’s Municode: